This holiday season I made eggnog for the first time.  It was surprisingly easy – thanks to our electric mixer.  My version was based on a recipe that used more milk than cream, and didn’t cook any of the ingredients.  We’ve been getting fresh raw milk from a local farm and our chickens are laying lots of eggs, so I had great ingredients to use.   Knowing the farmer is especially important with raw eggs and dairy!  I used our neighbor’s maple syrup instead of the white sugar included in the original recipe.  As an added bonus, the vanilla extract I made using rum earlier this year flavored the rich creamy drink.  My final product had a lot of foam on top.  To reduce this “head,” I suggest beating the egg whites and cream until thick but not to the point where they can form peaks.  Leaving time for your final product to rest and chill is also important. 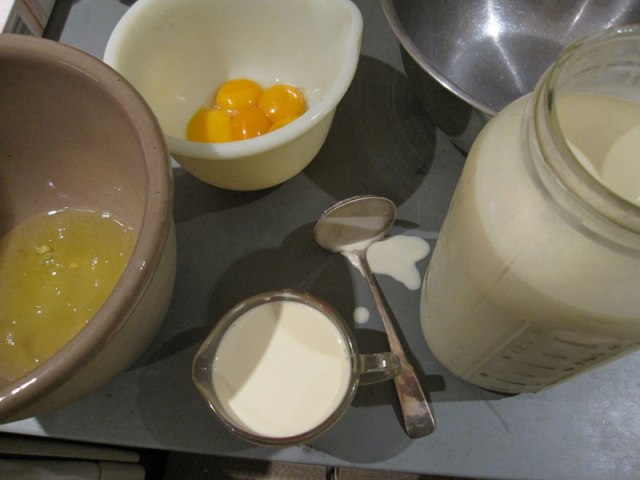 -Take out three medium to large bowls and an electric mixer or beater.
-In the first bowl beat egg whites until they start to thicken (do not need to be stiff).  Add 1/2 cup maple syrup, beat until thick.
-In the second bowl: Beat egg yolks and salt until the color begins to lighten.
-Combine beaten egg whites with yolks and beat until mixed and thick.
-In a third large bowl beat cream until it starts to thicken (as with the whites, thick but not stiff).
-Add 1 tbsp maple syrup,  1/2 tbsp vanilla, and 1/2 tsp nutmeg to the beaten cream.
-Add milk and rum beating continually
-Fold together all the ingredients, chill and let rest.
-Gently stir your batch before pouring into glasses.  Serve with a a sprinkle of nutmeg on top of each glass.

Tonight, I’m going to freeze a serving of our eggnog in our immersion blender’s smoothie cup.  Once it’s frozen, I’ll use the blender to make an eggnog milkshake!  I’ve also heard great things about eggnog french toast and eggnog fudge…